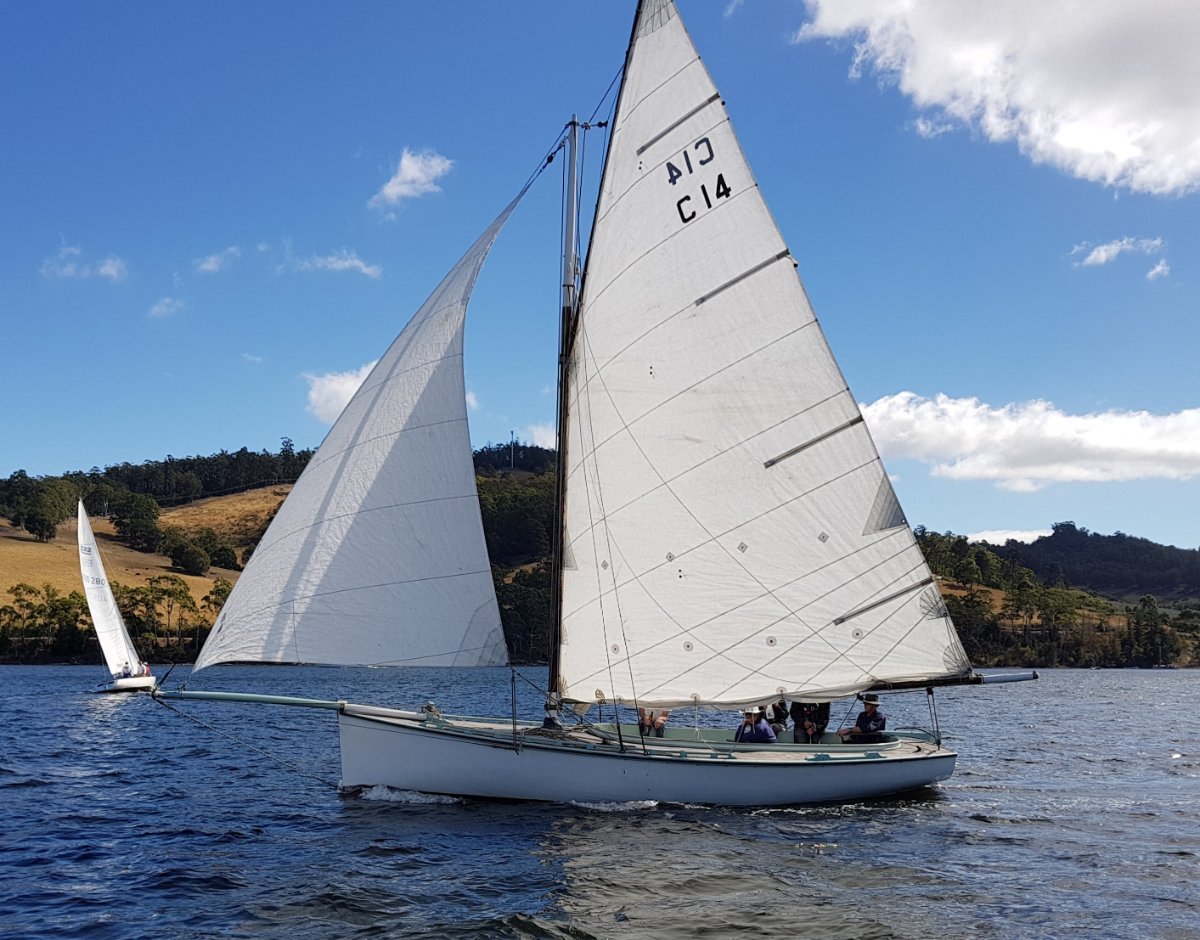 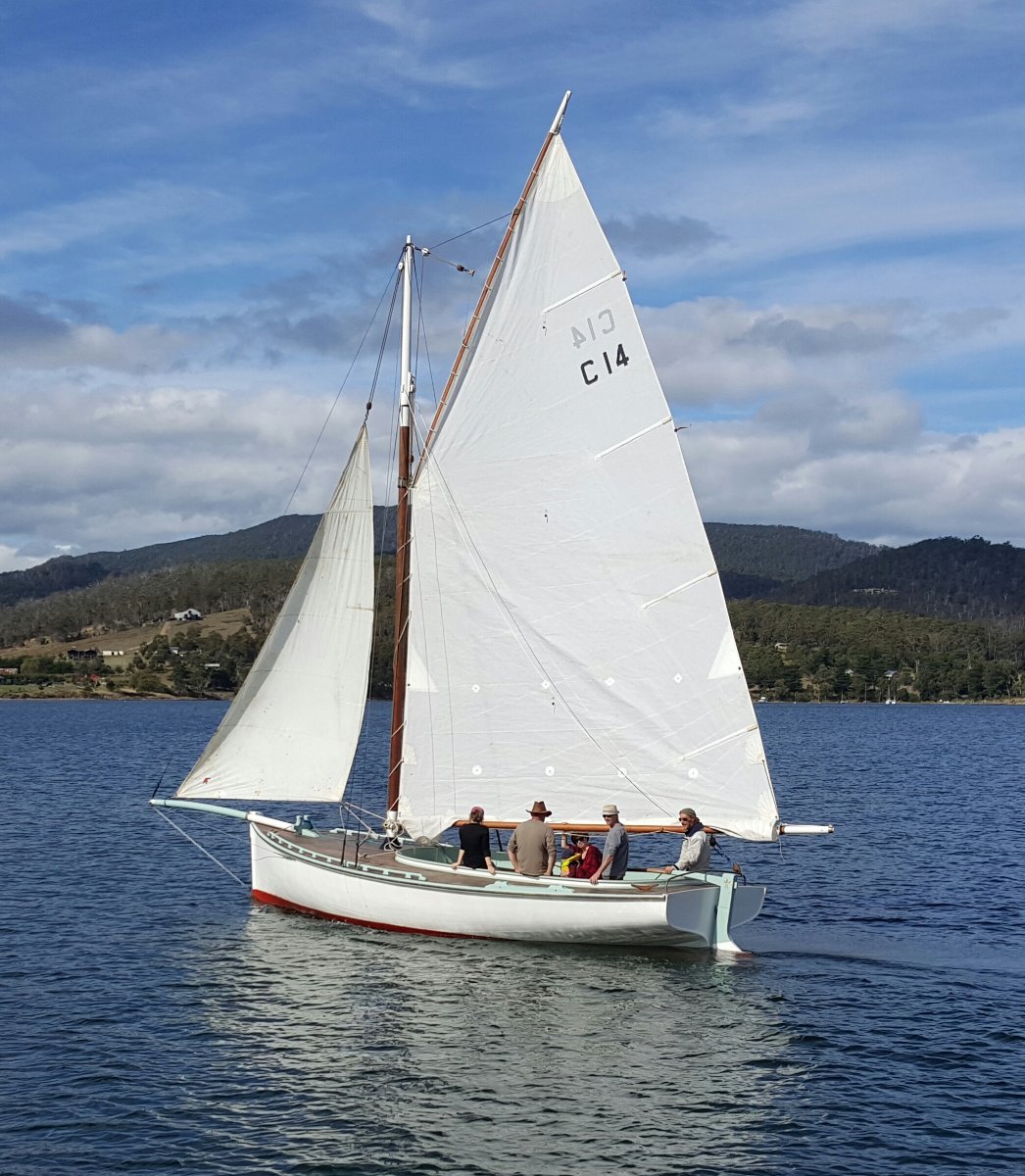 Description: 28ft Queenscliff Couta Boat ROYAL
COUTA BOAT ROYAL, A RARE GEM COMPLETELY & TRADITIONALLY RESTORED!
The classic 28' Couta Boat is believed to have been built in Queenscliff, Victoria 1927.
With 3/4" N. Z Kauri Pine planking, she was found as a bare hull in a shed in Dover and professionally restored using Huon Pine timbers in Cygnet, Tasmania.
Shipwright, Lindsay Wood and 3 skilled enthusiasts spent 7 years meticulously bringing the Royal back to her former glory. The results proudly displayed in the Cygnet episode of the ABC series of "Backroads".
Have a peak at ROYAL sailing in Port Cygnet using the link.

The comprehensive restoration has given the beautiful Royal another 100 years!
Make no mistake, the Royal is not of the modern strip-planked & glued construction... It is a true and increasingly rare example of a classic traditionally built wooden boat... Built to last!
Restoration:
*Fully re-fastened with copper nails & roves.
*Fully re-ribbed with Huon Pine (2"x1")
*20% planking replaced with Huon Pine
*Traditionally laid Celery Top deck & deck beams
*Huon Pine Centreboard Case & powder coated centreboard
*Huon Pine round combings
*Huon Pine fitout, thwarts & sole
*Traditional gunter rig with Oregon mast & spars
*Sails: Headsail, Main & Storm Jib with sail covers & bags
* Blue Gum bowsprit
* All new bronze fittings
* Complete custom-made 3 piece deck cover (whole boat, boom tent or fore deck)
ROYAL'S HISTORY.
While the builders of ROYAL are lost in time, ROYAL exhibits all the qualities of a Victorian Queenscliff Couta Boat from the 1920's and resembles closely in design those boats built by Mitch Lacco and Peter Locke of Queenscliff. Built to fish for Barracouta in the treacherous seas of Bass Strait and return with a hull full of fish, these boats were designed to bring the Queenscliff fisherman home safely.
ROYAL was most possible named during the visit of the Duke of York, and the Duchess of York first visited Australia an event that was enthusiastically celebrated by the whole nation.
In 1928, ROYAL was first reported as being owned by V. E Hall a Cray fisherman of Kingston, South Australia. Queenscliff Couta boats were much sort after by the South Australian fisherman and were often purchased second hand from the Queenscliff fisherman, but it is possible that ROYAL was built for V. E Hall
On September 25th, 1938, a terrible storm hit Kingston Beach where ROYAL and several other fishing vessels were moored. 3 boats including ROYAL were swept from their moorings with the two others smashed to pieces on the shore, only ROYAL had disappeared, believed buried in million's of tons of seaweed that was deposited on the beach during the storm, a feature once part of the South Australian coast. ( Yes That's Millions of Tons!)
Presumed lost, fisherman probed the fifteen-foot bank of seaweed with stakes for two months and when all hope of finding ROYAL were lost only Mr Hall persisted and finally the distinct sound of something solid was felt under the seaweed. After the seaweed was dug from top of the boat, ROYAL was found in almost perfect order considering her ordeals
From the evidence ROYAL continued to Crayfish for many more seasons and eventually returned to Victoria where in March 1964 having outlived her usefulness as a fishing boat was found neglected and almost beyond economical repair at Walsh's Boatyard for sale at the princely sum of £450.
Fortunately for ROYAL and despite Mr Walsh suggesting the boat was only suited for a bonfire Mr Hans Lutjens was taken by ROYAL'S graceful shape and after peeling back the years of gunge and revealing her beautifully built hull, £250 changed hands.
Hans took ROYAL to Mooroolbark and proceeded to transform ROYAL into a sturdy Motorsailer and renamed her BOHEME.
Launched in 1967 Hans Lutjens eventually decided to move to Kettering in Tasmania and take BOHEME with him.
By 2007 ROYAL had again fallen into disrepair with the cabin and deck removed and left under a tarp in the fishing village of Dover and the owner daunted by the scale of work needed to restore her. In another lucky twist of fate a group of enthusiasts sailors looking for a project having heard reports of a Queensland Couta Boat under a tarp in Dover went to investigate.
ROYAL was trailered to the coastal hamlet of Cygnet Tasmania and under the careful management of Master Shipwright Lindsay Wood over the next seven years ROYAL was restored back to her original condition using many of the beautiful Tasmanian timbers available in this area.
After 10 years of enjoying sailing ROYAL in the beautiful waters of Port Cygnet, ROYAL is now ready for a new owner and her next adventure!
ROYALS dimensions are as follows:
28 feet LOA. 10 feet Beam. Draft of 3 feet and 6 feet with plate down.
Restoration notes from the Shipwright:
Full length New Zealand Kauri hull planking. Extensive use of Tasmania Huon Pine including all new ribs, Huon pine combing, Huon Pine centreboard case, Huon Pine rudder, Huon Pine thwarts and stern sole. Tasmania hardwood stem, knees and blue gum bow sprit and bit. Tasmanian Celery Top Pine deck beams and laid deck. Douglas Fir mast, boom and gaff. Full canvass covers. Three sails. 48 Volt marinised electric motor and Sonnenchein 230 Amp hour lead acid gel batteries. 48 Volt solar array and solar regulator for motor charging while on mooring. 48 Volt 25 Amp battery charger for use with shore power or generator. 12 Volt bilge pump and 12V battery with 12 V solar panel.

Check the history of this boat!