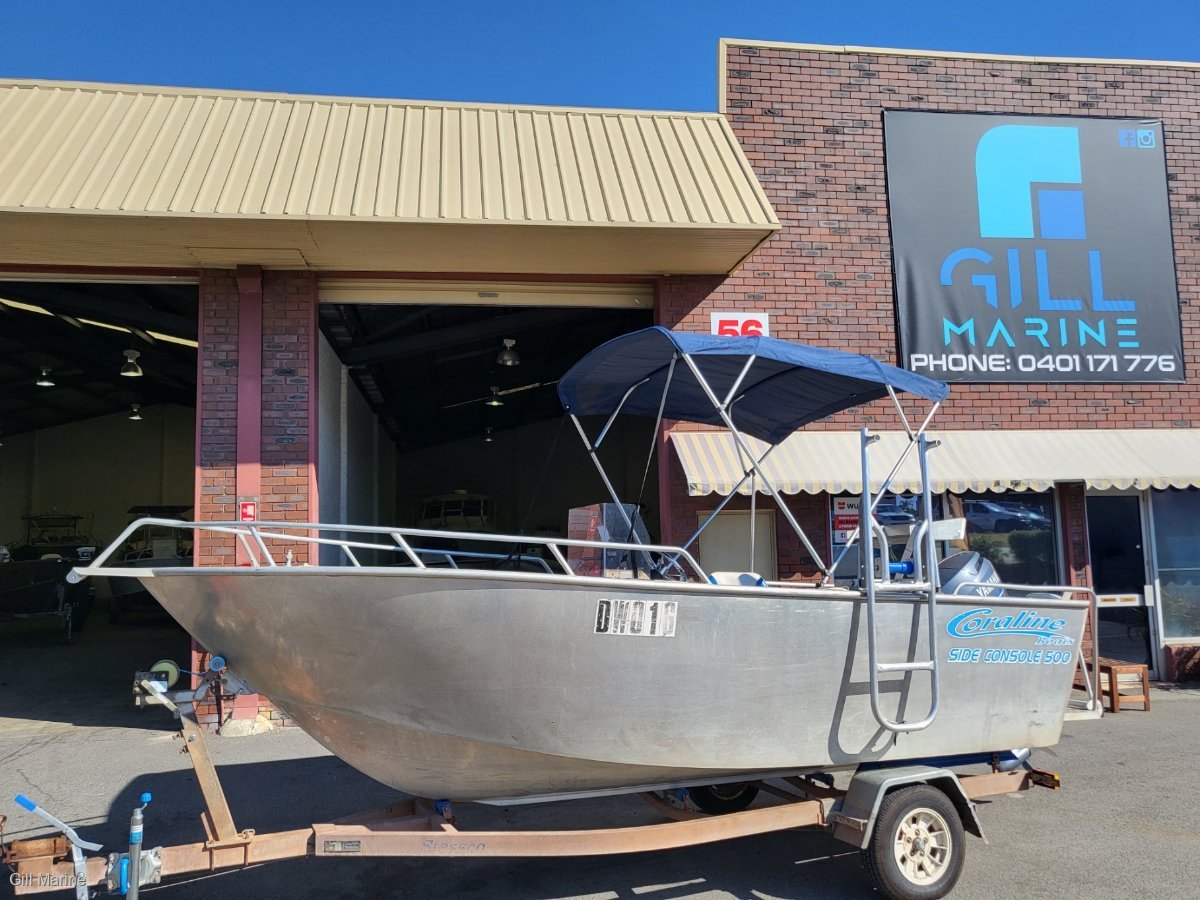 Description: Coraline 500 SIDE CONSOLE FISHING WEAPON!!
Coraline build some very flash boats up to eight metres in length, so it was interesting to review the one the builder had made for himself: an unpainted five-metre side console. It was not that he had a hair shirt complex - it was a matter of building as much boat as he needed to suit the job it had to do.

Just about every launch would be off the beach so unnecessary size would be a handicap. The same circumstances, where the trailer would have a chance to knock the boat around, meant a painted finish could have an unhappy life; and the saving of a few thousand dollars was as valuable to him as to anybody else.

The structure too suits a rugged working life, although this is a standard feature; and it probably needs to be with a five-year hull warranty. Sides and bottom are in 4mm aluminium plate, and the wide wrap around coamings, especially where they curve around aft of the anchor well, and side pockets as structural members give great rigidity. This is a tough beast.

The self draining deck is raised forward to make a casting platform; it houses a large storage space below it and has a socket in it taking a swivel seat. The deck is carpeted, which is more or less a necessity for protecting bare feet from sun-heated aluminium. Another useful carpet application is on the basic metal quarter seats located alongside the motor well. I often wonder why owners of aluminium boats with box thwarts do not glue indoor-outdoor carpet on them - into pain perhaps.

Centre consoles can be prone to wetness, and even on summer days that is not usually welcome. Coraline evolution has seen the adoption of wider reversed chines that extend right forward as knuckles. On the 500, as on others in the series, they do a fine job of depressing the spray.

The same chines, despite a steeper deadrise, have added to the Coraline's stability. Two or three is the usual number going fishing in this boat, and it has enough stability to allow them to position themselves pretty well wherever they want.

BUILT TO BE A WORK HORSE IN THE OCEAN
PLENTY MORE FRUIT!!!
Trailer
SINGLE AXLE MECH BRAKED GLAV TRAILER READY FOR THE NEXT ADVENTURE
Trailer Make/Model
CUSTOM
Trailer Registration
YES
Remarks
PLEASE NOTE - offers via email // text prior to physically viewing the boat may not be replied to or considered. Please call us on the numbers provided to discuss genuine offers thanks team at GILL MARINE