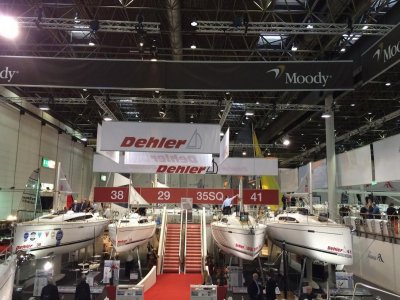 Team Windcraft’s MD Peter Hrones and Dehler Brand manager John Cowpe were at the 2014 European yacht awards in Germany to see the Dehler 38 win yet another award.

The list of awards won by the Dehler 38 is impressive by any standard.

Ed Sherman, member of the Cruising World jury commented on why the 38 won this year’s coveted prize.

“It perhaps goes without saying, but good sailboats should sail well. The German-built Dehler 38 definitely does that. It was a big reason our judging panel named it 2014’s Best Cruising Sailboat under 38 feet.

I really enjoyed this boat’s open cockpit layout; it’s very easy to manoeuvre and everything’s close at hand for efficient sail trimming. It’s a fine dual-purpose racer/cruiser. You could do regattas, and have a good time with family and friends!”

2014’s Düsseldorf’s ‘Boot’ also saw the launch of the New Dehler 46. The 46 follows the sleek, contemporary styling of the 38 and offers the same high quality interior.

According to Team Windcraft’s John Cowpe.

“The new Dehler 46 looks set to follow the incredible success of the Dehler 38 – both boats exude style, performance and quality. One of the key things the market appreciates is the ability of Dehler yachts to easily transform from a regatta racer to a fast family cruiser or somewhere in between. The 46 is sure to be a hit within the Australasian sailing market where quality, strength and performance are top of the wish list for our sailors. ”

5 Dehler 38s are on their way to Australia and New Zealand to enjoy racing and cruising Downunder this year.


For more information, check out: http://www.windcraftdehler.com/