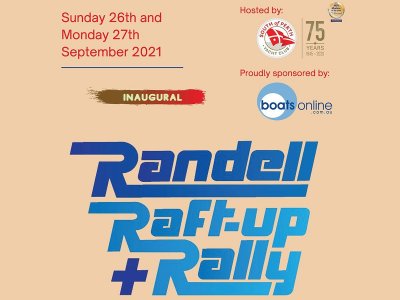 The inaugural ‘Randell Raft-Up & Rally’ will be held on the Swan River over 2 days on Sunday 26th and Monday 27th September 2021. The idea behind this is to gather and celebrate the iconic boats designed by WA Naval Architect, Len Randell.

Over the past few years, there has been an increasing level of demand to celebrate and document the literally hundreds of boats designed by local legend, Len Randell. This is the first time ever there has been a public event to bring a collection of Randell designed boats together.

All boating enthusiasts are welcome, you don’t need to own a boat to join in!

‘Len has received numerous awards for his contributions and it’s an outstanding achievement to be the recipient of any award, but to be ranked amongst the top in your field is nothing short of pure excellence. We are proud Len is Honorary Patron of our Club.’ said John Midolo, Commodore of South of Perth Yacht Club.

The two-day event is designed to celebrate the prominent role that Len Randell has played designing boats. For over 70 years and even up to today at age 96, Len still, with just the magic of his pencil, is creating and designing boats. As a child growing up near the river, Len was fascinated with the boat builders working with timber at Maylands boat yard. Len initially designed and built small sailing boats for local and coastal waters for he and his new wife Toni to enjoy. He designed the Darkie series of 14-foot dinghies for fellow South Perth Yacht Club member and World Champion, Syd Corser in the 1950’s which drew him worldwide acclaim.

As a young competitive skipper, Len won many trophies for offshore races especially the popular but gruelling Mandurah or Bunbury and return races in the 1960s and 70s. He has designed everything from the small Pelican sail training boat which could be built out of plywood at home on which fleets of the SoPYC kids learned to sail, right through to designing the Leeuwin Sail Training Ship, a multimillion-dollar foundation training hundreds of participants since launching in 1986. Randell’s stylish Targa 41 was awarded Modern Boating’s 1982 Power Boat of the Year for “efficiency, economy, aesthetics and innovation”

Boats that Len designed can be found now around the world whether they are fibreglass, steel, timber, or aluminium. Boats owned by individuals as recreational vessels or for commercial use like crayfish & prawn trawling fleets and ferries. It doesn't matter which one of his designs you may come across because anything Len draws is a masterpiece!

Exclusive sponsor, Boats Online, are thrilled to be involved. ‘This is an opportunity for owners and enthusiasts to be part of the inaugural ‘Randell Raft-Up’ and ‘Sail Past’ on the beautiful Swan River in Western Australia.’

‘Heather and I have known Len as fellow long-time members of SoPYC. Our kids learned to sail on a Pelican. Boats Online are delighted to be sponsoring an event celebrating a West Australian boating legend. Come and join in to meet and chat with Len Randell.’ Graeme said.

Commodore Midolo encourages anyone who’s had involvement with Randell boats to come and celebrate the 2 days of traditional, fun on and off water events. A free community BBQ breakfast on Monday morning will conclude with the spectacle of a traditional ‘sail past’ procession of decorated boats leaving the main jetty enroute into Perth Water in the afternoon.

Registration is essential and easy ... follow the links to the South of Perth Yacht Club web page


For more information, check out: https://sopyc.com.au/randell-raft-up-and-rally/