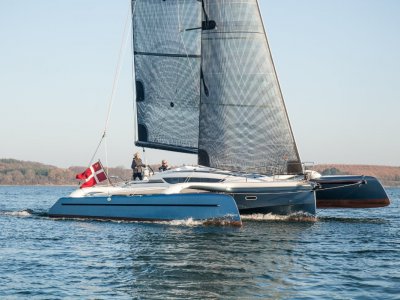 “This new design gives 20% more buoyancy in the floats and 20 cm extra in the boat's
overall beam, ” says TMG Managing Director John Cowpe. “In addition, the buoyancy centre
is located lower, which overall gives more initial stability and means that the boat can be
pushed further in strong winds.
The profiles of the floats are lower, which results in a less wetted surface in light wind. In
strong seas, these floats perform elegantly and provide faster and more comfortable
sailing. The boat has become sportier to sail and is more agile and responsive at the
helm.
The new Dragonfly 32 Evolution offers a new interior design in varnished elm wood. This
gives a bright, modern and cosy look. The Dragonfly 32 Touring remains, as before, with
lower rigging and the original standard floats.
For those who want a more modern look and sporty and safe sailing with a taller rig,
Dragonfly 32 Evolution is the perfect boat – every sailor’s dream. ”


For more information, check out: https://www.themultihullgroup.com