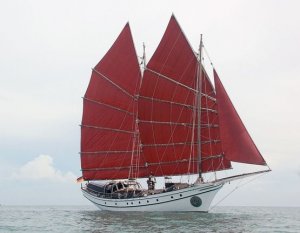 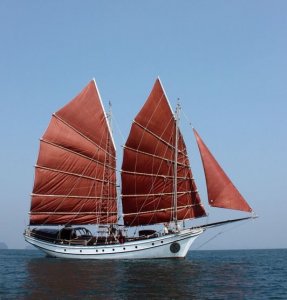 Notes from the owner
"Our Malay "Perahu Besar" (big boat) is one of a kind in South East Asia!
1979 I came to Pulau Duyong (island Duyong) from Germany and asked the local craftsmen to build me a BEDAR, the original Naga Pelangi.
As the first indigineous Malay junk to finish a circumnavigation, this bedar had proven the seaworthiness of the traditional Malay design when we anchored again in the estuary of the Terengganu river in 1997.
The art of assembling wooden boats, this great maritime heritage of the Malays seemed on the brink of loss then: Of the more than 30 yards thriving in 1979, only a few had survived by 1998.
I sold my first boat and decided to build the new Naga Pelangi in an effort to revive and perpetuate the tradition.

We combined the looks of old with the basic luxury of today for you to enjoy your time on this painstakingly hand-crafted vessel. Sit back and relish the amazing scenic beauty of South East Asia while we gently glide over the water to exotic destinations.
Enjoy the privacy of a customised cruise while captain and crew cater to your wants and needs. A wide range of destinations from the Andaman to the South China sea, from Thailand to Borneo is available. Do you have a special occasion to celebrate such as honeymoon, anniversary or other memorable event?
Whether you prefer adventurous sailing, sightseeing of historic seaports, meeting exotic cultures or choose to lay back on pristine beaches, diving and snorcheling in secluded bays of remote islands, we will use our experience and knowledge to meet your expectations and make it all happen.

The Birth Of A Legend
The Naga Pelangi is the first of the legendary "perahu besar" (big boat) of the pinas-type built in decades.

She is a new boat in the tradition of the Malay wooden boat building which is thousands of years old:
The ancestors of the Malays, the Proto-Malays, were sailing people. Sailing they colonised the archipelagos and islands up to Polynesia and Madagascar since 2500 BC. For each purpose, for trading, fishing or piracy, they developed a design.

When Malacca became the center of the spice trade, the Malay Peninsula turned into a melting pot of the seafaring civilisations:
Indians, Cinese, Arabs and finally the Europeans arrived in their distinctive craft, inspiring the Malay boatbuilding.
Generations of seafaring, boat building Malays in their desire for the ever faster and more manoeuverable vessel combined the positive elements and one result of this cultural interchange is our junk hybrid: the Terengganu junk schooner of the pinas-type.
Body, jib and bowsprit of the pinas are of western origin, the two fully battened lug sails are Chinese. The peculiar building technique is indigenous to the Malay cultural shpere.
The focus of the Malay wooden boat building is the island of Duyong in the estuary of the Terengganu river on the east coast of the Malay peninsula. Since the last sailing freighters of this type were decommissioned in the 1980s, the art of building them is on the brink of extinction.

As the epitome of the maritime culture of the Malays, the Naga Pelangi wishes to inspire the continuation of this heritage.

The Spice Route
When pepper was worth its weight in gold, when nutmeg, clove and vanilla were scarce and dear and the merchants were growing ever richer, the Europeans set forth to break the monopoly of the spice trade.

The Spanish and the Portugese ventured to search the land where the spices came from and Cristoforo Colombo found the American continent and Alfonso de Albuquerque found Malacca, then the worlds biggest port and the hub of the spice route.
The European longing for the spices was at the root of the endeavours that are remembered as the age of discoveries.

The memories still evoke romantic phantasies of expeditions to remote lands, of ships with towering sails, of epic battles, mysterious cultures, of princes and princesses with treasures beyond believe and of perilous adventures beyond imagination.
Finally the Moluccas were found, the Spice Islands, from where the seafarers of the Malay archipelago brought pepper, clove and nutmeg to Malacca.
SELLER DETAILS
Broker / Dealer
SeaBoats